Transitions are to States as Flows are to Stocks: they move the model between States.

Imagine a simple Agent-Based disease model. In this model each agent might have two States: Healthy and Infected. The agents start in the Healthy State and then transition to the Infected State according to some infection rule. This transition is controlled by a Transition primitive that connects the two states. When the transition is activated, an agent that is in the Healthy State will be moved to the Infected State. A schematic of this simple agent with the two States and a Transition labeled Infection is shown below. 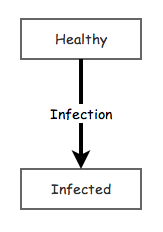 The key configuration option for a Transition is what triggers the Transition. There are three different types of triggers:

An example of a condition trigger would be to trigger the transition if some other state in the system occurs. For example: